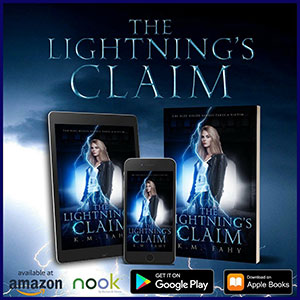 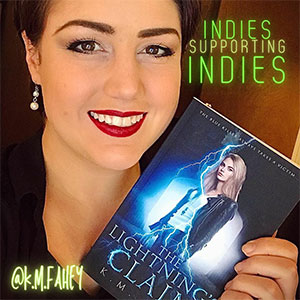 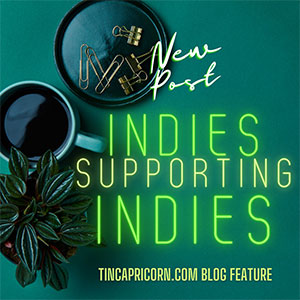 When K.M. Fahy isn’t working on her doctorate in Clarinet Performance, teaching in a private woodwind studio, performing the clarinet professionally, or painting via acrylic on canvas for an upcoming art show–she is writing.

Fahy grew up in Southern Illinois but now lives in CO and loves hiking, and backpacking in the Rocky Mountains with her Border Collie/Labrador Xena. Her hikes in the mountains inspire her stories, as well as her childhood riding horses and shooting her bow in the woods of Southern Illinois.

Due to the pandemic, the woodwind studio and professional performances are on hold, but Fahy has used that time and opportunity to delve into her more ‘socially distanced’ creative endeavors–including the publication of her first book The Lightning’s Claim.

Fahy caught my eye on Instagram as a fellow writer of sci-fi/fantasy with an upcoming release, but after completing this virtual interview I know that we have art and painting in common too! I have noticed a trend with all the creatives that I interview for Indies Supporting Indies–that most creatives have many different fields and mediums of expression. Fahy is no exception, read below to find out more about this excellent human.

Fahy: Thank you! It was a super exciting release, for sure! The world-building for these two books has been MASSIVELY different! The Lightning’s Claim started with the concept of a dangerous world—I knew I wanted some kind of “naturally” occurring disaster around which to base the plot. When I finally landed on lightning, BAM. The plot, the characters, the Gadgets, the gods… everything was born.

The Dragon Hacker has been a very different experience for me. It’s a post-apocalyptic science fantasy based in this world set about fifty years after a nuclear World War III, so the world-building took on a whole new set of rules. I had full maps of the United States pulled up, looking for the perfect location to serve the plot, and did all kinds of research on the different mountain ranges and such. I ended up finding the perfect setting right in my home region of southern Illinois, so I’m thrilled to write that! Once I had location and history of the war laid out, the plot and the factions all sprang to life. I’m really excited for this novel!

What is your writing practice like? Are you a planner, planster, or pantser?

Fahy: I have to call myself a plantser, honestly. I love to plan and plot, and I do need a certain amount of that in the early stages of a book, but I am growing more and more fond of flying by the seat of my pants. I fell in love with discovery writing in The Lightning’s Claim, which was significantly less plotted than Dragon Hacker to start. I had to rewrite 75% of the book, of course, but I can’t bring myself to regret that first telling of the story to myself. It made LC what it is today, even though an insane amount of plot changed in the rewrite. I’m just not sure it would have matured the same way without that 100% pantsed first version. DH has a more solid foundation starting out, but I’ve left plenty of room for growth, rest assured!

I’ve seen mentions on your IG of a series in the works. Care to tease us with any details?

Fahy: I do have an epic fantasy trilogy in the works—my passion project, actually. It’s called the Dragon Rings Trilogy, and has been a part of my life since I was thirteen years old. It started as a short story about dragons in a pink notebook, and grew up with me through so many different stages. Book One has been written and rewritten several times, and will need another major overhaul before it ever sees the light of day, but I am so excited to share this trilogy with the world. Its split POV mostly follows Talyn, a young, disabled dragon; and Rhavaniel, a warrior elf from the secluded southern region. It explores a full world of fantasy lands and creatures, and is full of darkness, humor, adventure, revenge, and romance

If you’d like to WIN A SIGNED PAPERBACK of Lightening’s Claim AND The Anchor of Time, sign up for Bella’s Cosmic Newsletter and follow me on Instagram for a chance this Monday December 7th for an opportunity to WIN BOTH paperbacks in a Holiday IndieBook Giveaway featuring two debut indie novels! What a present!

To check out more about K.M. Fahy her author website is: https://www.kmfahyauthor.com